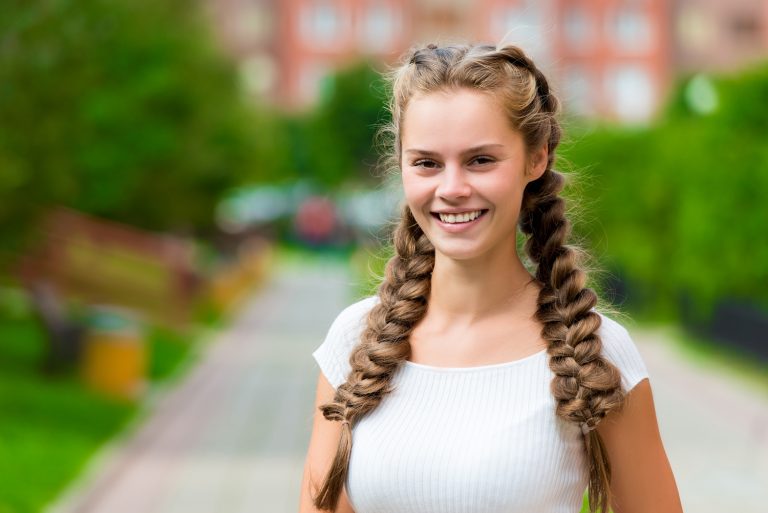 Having long hair is favoured by many women because it feels more versatile. The options are truly endless. However, even though you can pretty much do anything with longer hair – from top knots and ballerina buns to a bohemian side braid – we are often too lazy to put any kind of effort into doing something out of the ordinary with our hair. Braiding hair, for example, seems quite complicated and difficult to do, so what many of us end up doing is using tongs to provide ourselves with curls or waves for a special occasion.

However, there really is no excuse not to have the hair you want every day of your life.

These braiding hair techniques for beginners are sure to provide an easy introduction to the art of hairstyles. 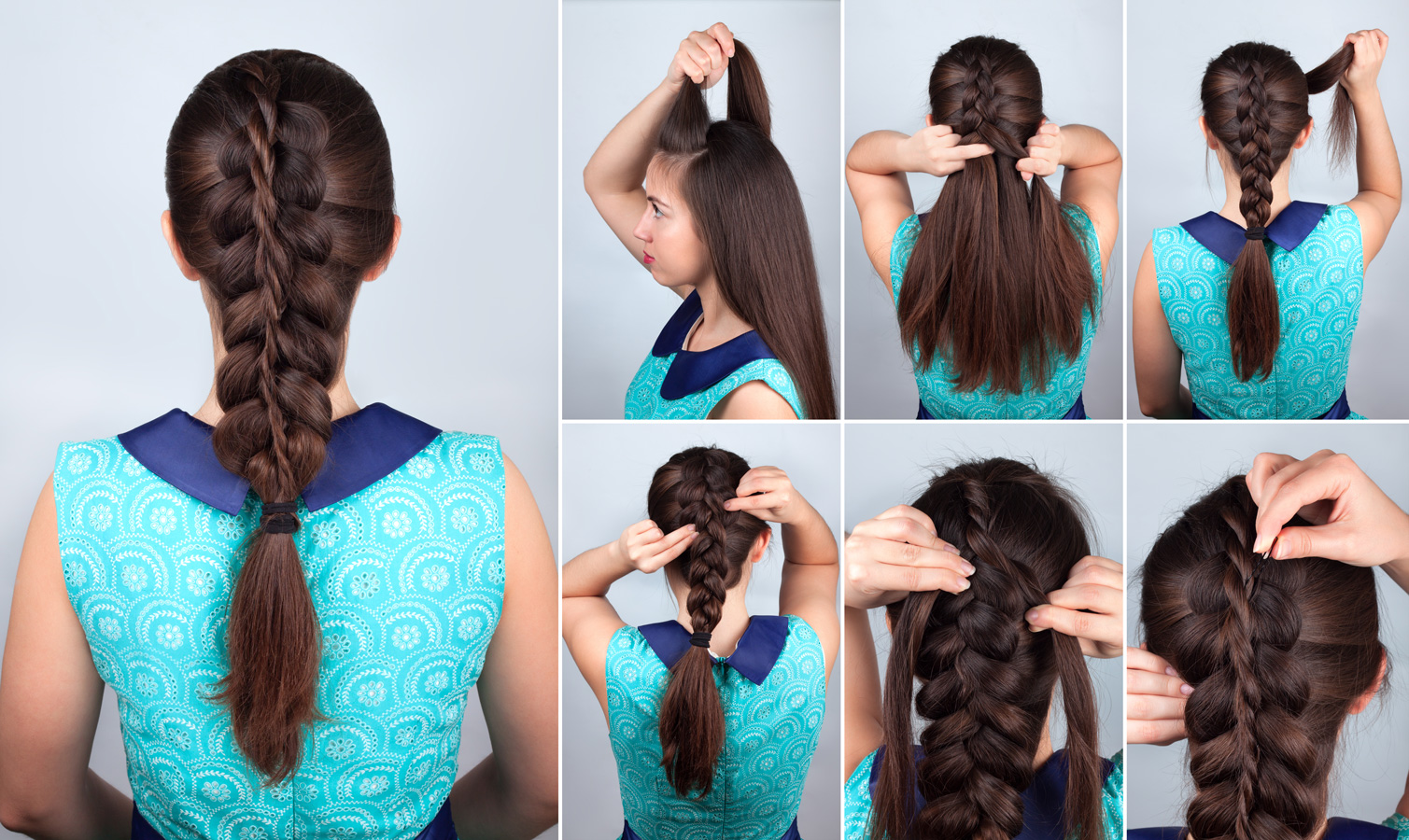 This is one of the simplest braiding hair techniques for beginners.

It’s basically foolproof as it is supposed to look loose and somewhat undone.

This style requires longer hair as the braid is usually supposed to start below your ear.

If you happen to have had balayage done on your hair, your fishtail is bound to look particularly cool as the different shades will be mixed in together.

The first thing you need to do when braiding your hair like this is to comb your hair.

Then, decide what side you want the braid to be on and move all of your hair to that side.

ake one strand of hair from the outside of one section and bring it into the other.

Then do the same from the other side and repeat going down the braid.

Simple enough! Just remember to always take strands from the outer edge of each section and not to let go of the braid at any moment.

Once you have braided all the way down, secure your fishtail braid with a hair tie.

When your braid is secured, tug at the smaller pieces of each half of your braid in order to add more volume to it.

A final styling tip would be to pick out a couple of strands of hair around your face and curl them into soft waves.

This will add to the bohemian-chic vibe of your look. 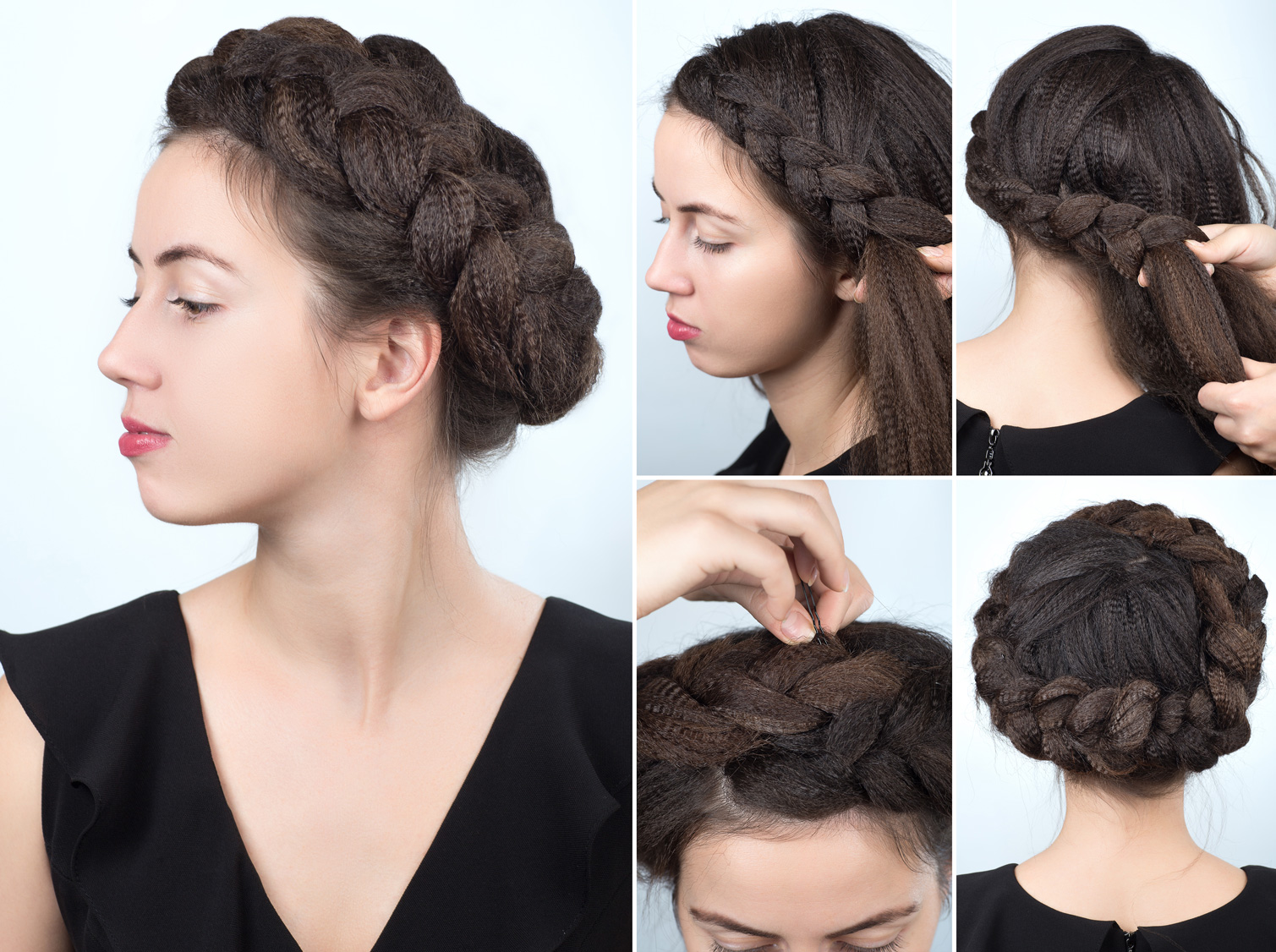 This is another simple hair braiding technique.

This is a cute play on the straightforward three-piece braid everyone is familiar with.

What makes this style stand out is that you want to make it go around your head like a crown.

While it is a stylish look, you can do it very quickly and it works with most hair lengths, even the ones on the shorter side.

First, comb your hair and make a centre part.

Take a thick strand on the right side of your head and braid it using the three-piece braiding technique.

Once you are finished, secure it with a hair tie and repeat the same thing on the left side.

When you have finished both of these side braids, pull them behind your head and crisscross them.

Use a number of pins to secure the braids to one another and the hair underneath.

This may feel tricky or messy because you won’t be able to see easily.

Either get someone to help you or use the two mirror trick to see what’s going on. (Stand with your back to your wall mirror and raise another mirror in your hand. You will be able to see the reflection of the back of your head in the handheld mirror). 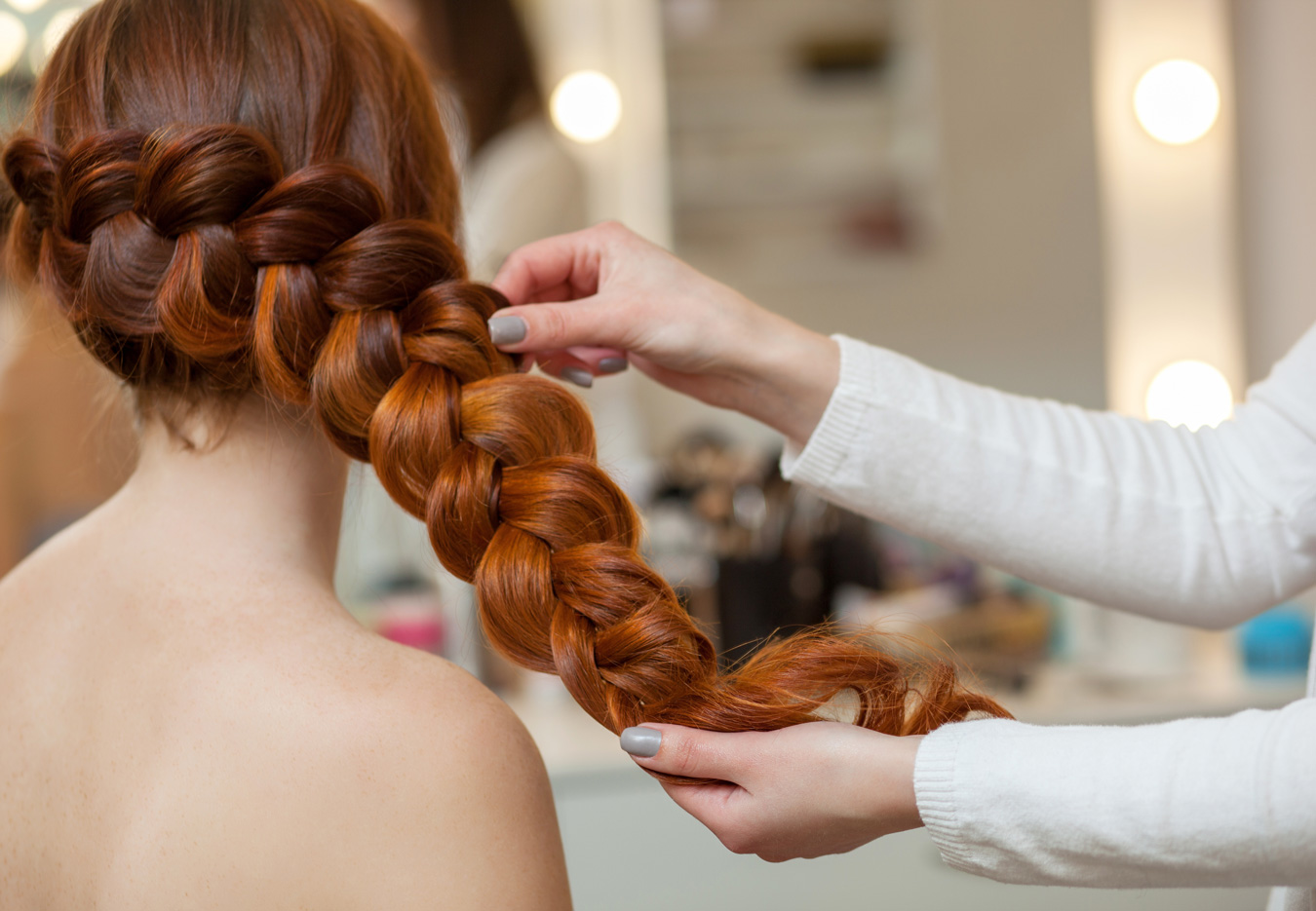 We are now upping the ante with our braiding hair techniques for beginners.

The French braid technique can be used for a variety of different styles (which we will get to in a minute).

However, it is good to master it on its own first, as it might require some getting used to, so let us first cover the basics.

A French braid is similar in that you have three sections.

However, the catch is that each time you bring one section over the other, you add another strand of hair to it.

In order to make one long French braid down the back of your head, you first want to comb your hair away from your forehead.

Then, take a big chunk of your hair from the top of your head.

This chunk should come from one section of your hair, as you do not want hair from higher up and lower downmixing.

This first section will be smaller, but your braid will grow eventually as you will be adding all of your hair to it.

Separate the first chunk into three even pieces.

The next thing you should do is begin a traditional braid.

Do a couple of rows of that to get it started and then start adding hair from each side of the head with its section.

Repeat until you have braided it all the way down and secure with a hair tie. 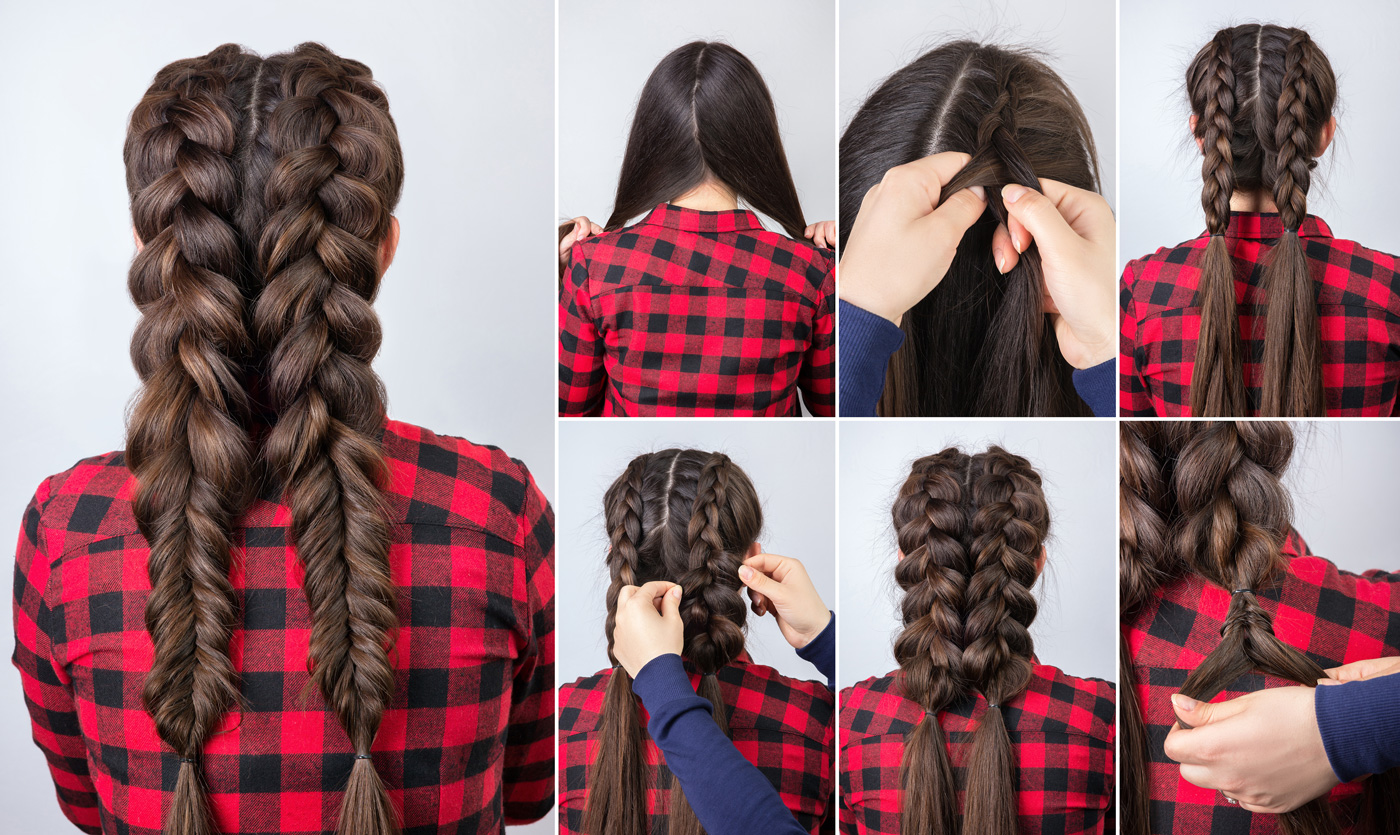 The Dutch braid is among the more complicated braiding hair techniques for beginners.

It looks fairly clean and simple, and it is, once you do it once or twice.

It is a pretty cool hairstyle as it can sometimes be reminiscent of a Mohawk when it goes down your head.

It is essentially the reverse of the French braid, so the technique is very similar.

You add strands of hair with every new braid movement.

The movements themselves, however, are slightly different.

Start the same way as you would the French braid.

Comb the hair away from your face and make sure there are no tangles.

Next, pick out a section at the top of your head and separate it into three even sections.

Before you start adding strands, braid several rows but going in the opposite direction of a typical French braid.

As a reminder, when braiding a typical French braid, you cross the sections over each other and into the middle.

When doing the Dutch braid, however, you do it under each other and you pull from the inside out.

If this sounds confusing, try one and then the other and you will see the difference.

This special technique is what makes the Dutch braid seem as if it is popping out.

If you like wearing braids but get sick of the same hairstyle, this is a great way of changing it up. 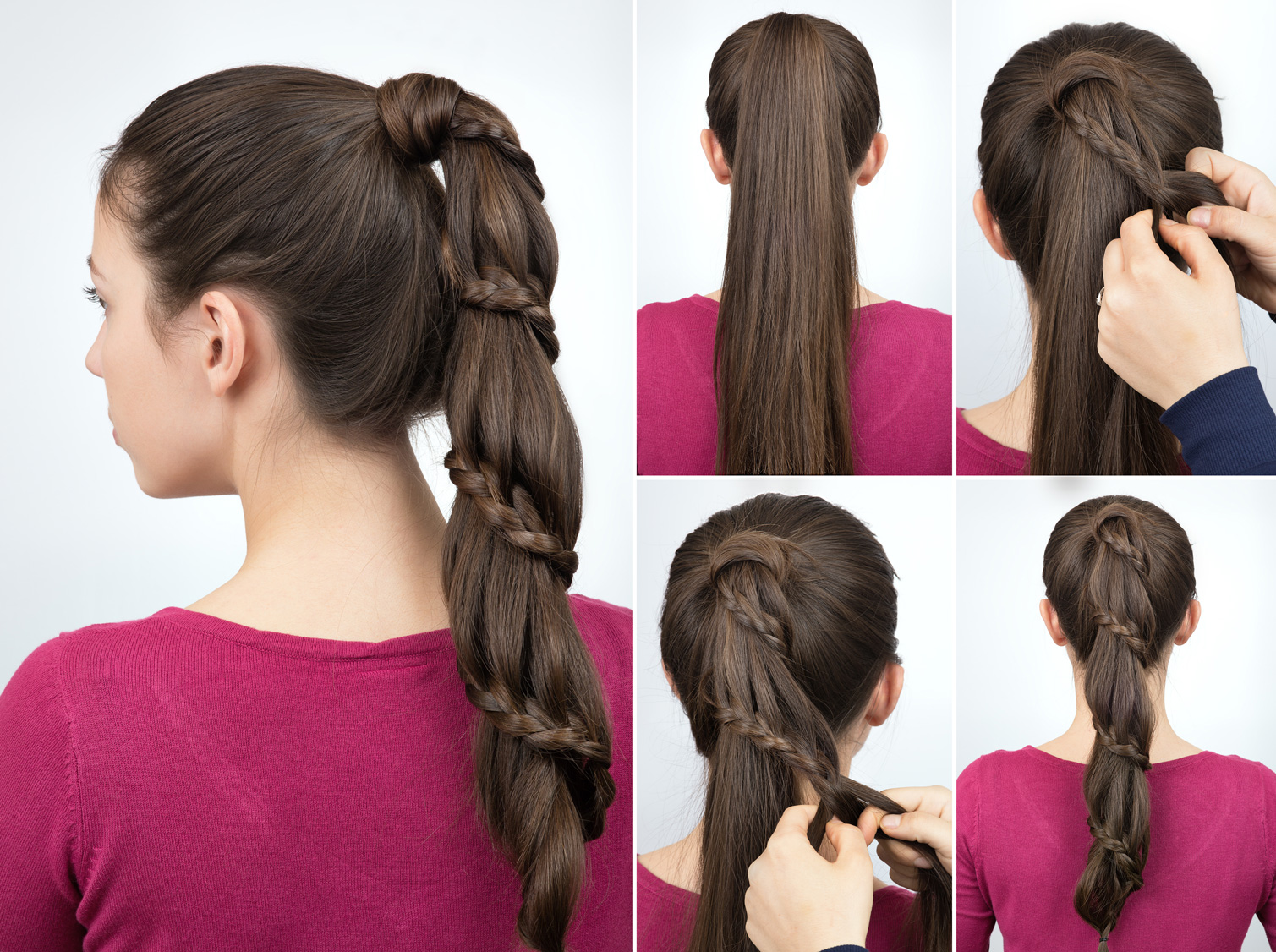 Another classic that is not so commonly seen is the rope braid.

This is a really cool hairstyle that looks almost physics-defying. It looks best on longer hair.

The first thing you need to do is comb your hair back and tie it into a ponytail.

Make sure the hair tie is on tight and separate the ponytail into two sections.

Take each section and twist it inward in the same direction.

Then, take the twisted sections and cross and twist them together and tie with an elastic band. 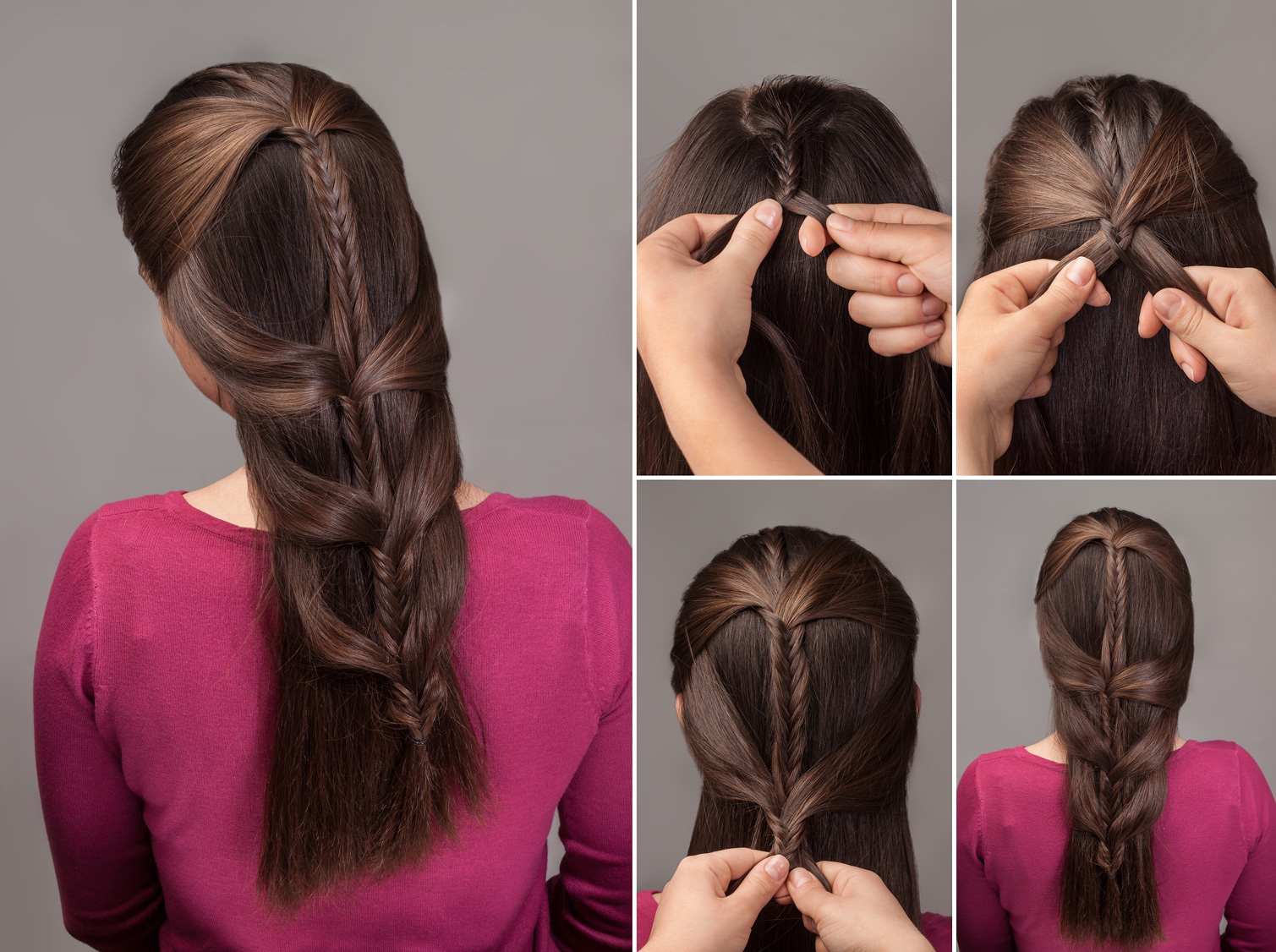 The final among the braiding techniques for beginners is the slightly intimidating chainlink braid.

In essence, it is not much different than any of the other ones once you get the hang of it.

Also, it can provide a nice respite from the typical way you do your hair every day without looking too done up.

This hairstyle also requires combing your hair back and tying it into a pony. It doesn’t have to be too high up.

In order to make the look a bit more sophisticated, you can take a strand of hair and wrap it around the elastic and then secure it with a pin.

Then, move on to sectioning the hair.

You want them all to be even and you want to clearly label them in your mind as one, two, three and four.

In order to start braiding hair like this, you want to take the third section and cross it over the second one.

If your mind is spinning at this point, do not worry. You do the rest of the braiding in the same manner, simply by repeating the steps.

Once you finish, secure the braid with a hair tie and once again take a strand of hair to wrap around it.